After facing several hurdles related to weather and other technicalities, Felix Baumgartner was successful in his supersonic skydive on October 14, 2012. The jump took place 24 miles from above the New Mexico desert . The free-fall was watched by viewers across the world. 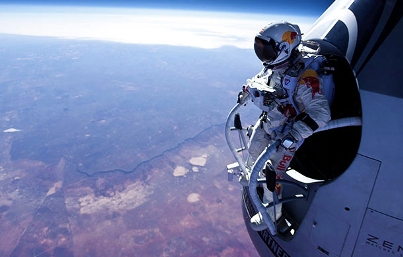 The 43 year old Austrian skydiver described his fall experience as swimming without touching the water. At a point Baumgartner was travelling at 833 mph and shattered the speed of sound. The fall lasted for four minutes 20 seconds and he has become the only human to do so without the help of a supersonic jet or space shuttle.

While detailing his experience the skydiver said, “I had a lot of pressure in my head. But I didn’t feel like I was passing out. I was still feeling ok, I — I thought, ‘I can handle the situation.’ And I did.” Felix was taken up by a 55 story balloon which had a capsule beneath and it took two and a half hours to reach the edge of space.

Baumgartner was being mentored by 84 year old Joe Kittinger, who set the record for the longest skydive in the year 1960. The whole team on the ground cheered when Felix deployed his parachute and landed safely.